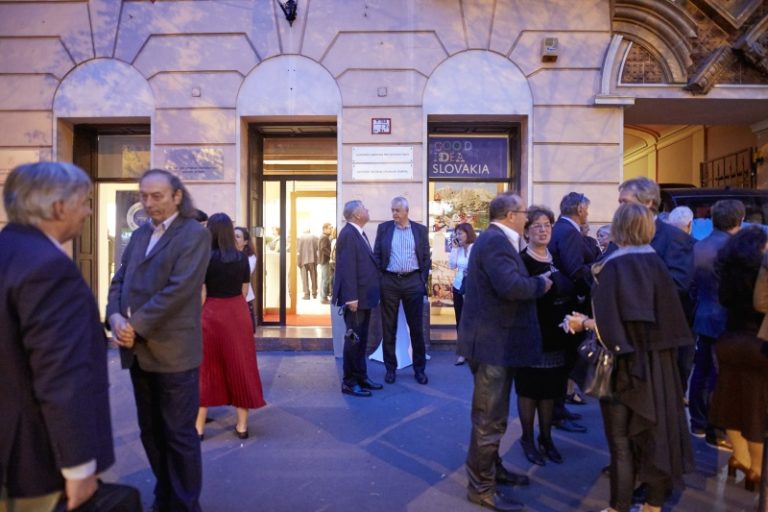 The basis was represented by pictures documenting the history of the 18th century and the rule of this monarch (1740 – 1780), whereas also later pictures from the 19th century were presented. Patrícia Ballx as the exhibition curator chose mainly the pictures (graphic work but also paintings)  catching Maria Theresa from various views – from official court portraits, allegoric pictures up to monumental historic scenes illustrating major events of her life, mainly relating to Pressburg (now Bratislava) and her position of the Hungarian Queen. A special moment was her coronation in Pressburg held on 25 June 1741, but also her speech before the Hungarian Parliament in Pressburg on 11 September 1741 known also as “Vitam et sanguinem”. In the pictures of this unique woman, mother, regent, queen and enlightenment reformer the historic events are mixed with legends and myths. 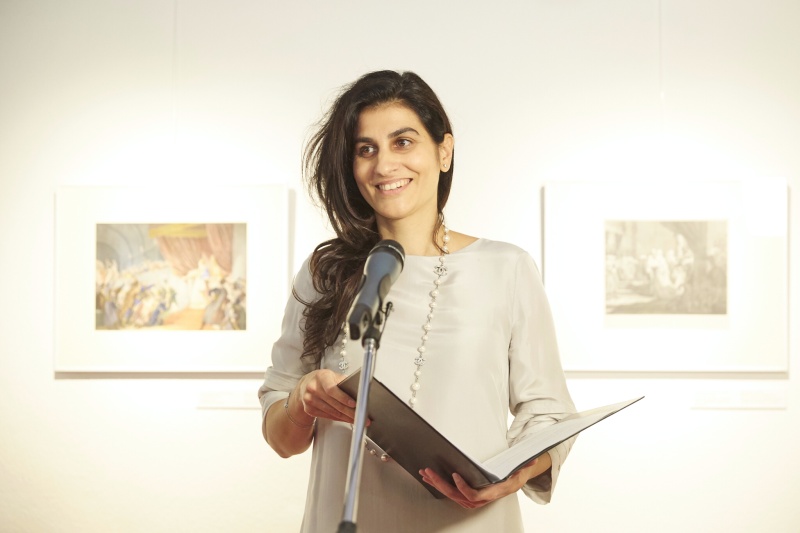 The exhibition within the premises of the Slovak Institute in Budapest was ceremonially opened on 13 September 2017. The introductory speech was made by the representative of the Slovak Ambassador in Hungary, Mr. Rastislav Mojto. The Manager of the Slovak Institute in Budapest Ms. Ildikó Síposová welcomed important guests in the premises and Mr. Georg von Habsburg and the Manager of the Historical Institute of the Habsburgs Gerő András also presented their speeches. The exhibition was open for visitors till 13 November 2017.

Many of the guests invited such as the representative of the Ambassador of the Slovak Republic in Budapest Mr. Rastislav Mojto, Mr. Gerő András, Mr.Gabriel Herczeg from the auction company SOGA and well-known literary scientist, translator and former Director of the Czechoslovak and later Slovak Cultural Institute in Budapest Mr. Karol Wlachovský highlighted the great commitment of the new Manager of the Slovak Institute in Budapest Ms. Ildikó Síposová, who managed her duty perfectly. 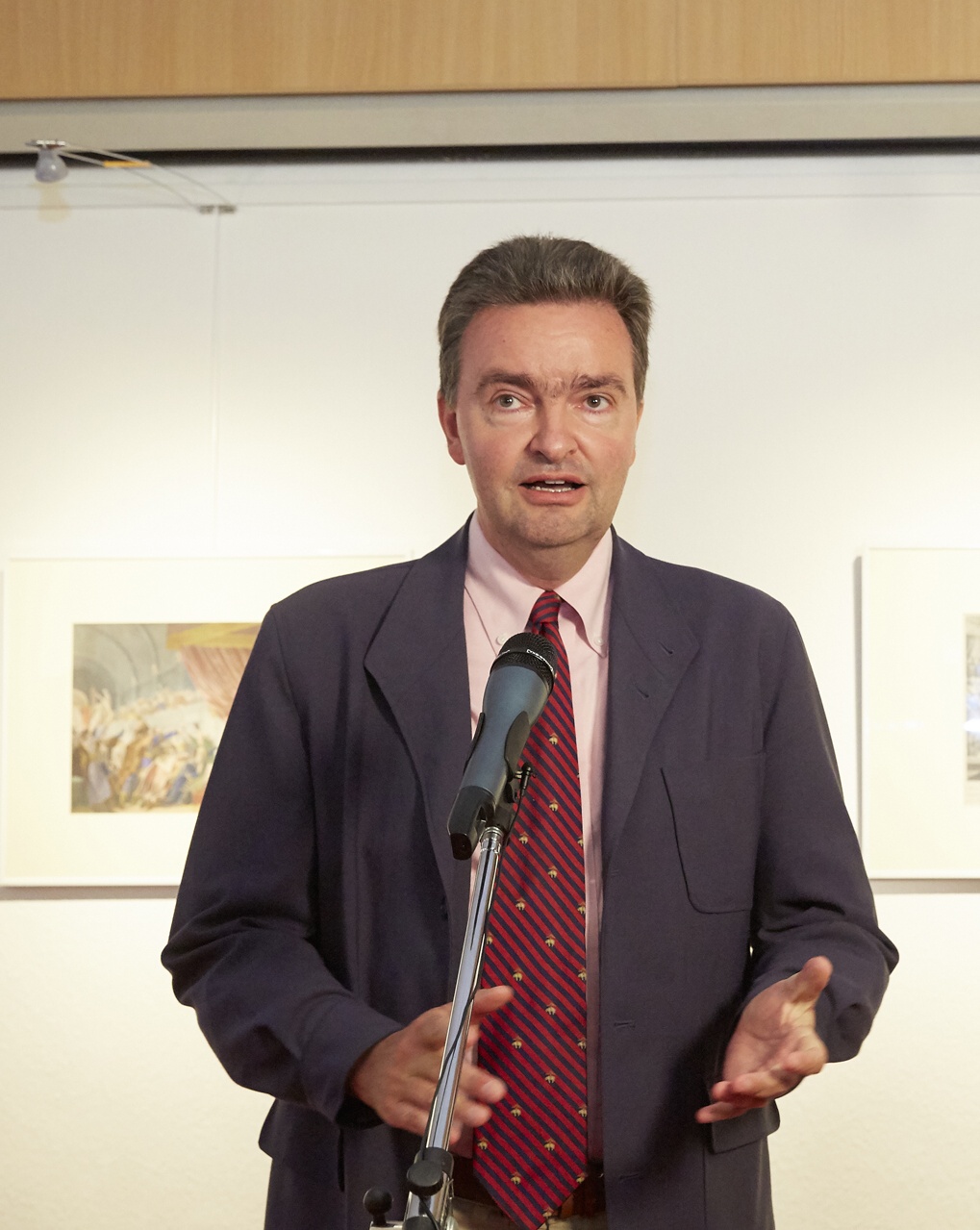 Because our newsroom could not miss this great event, we would like to extend our congratulations for the new Director. 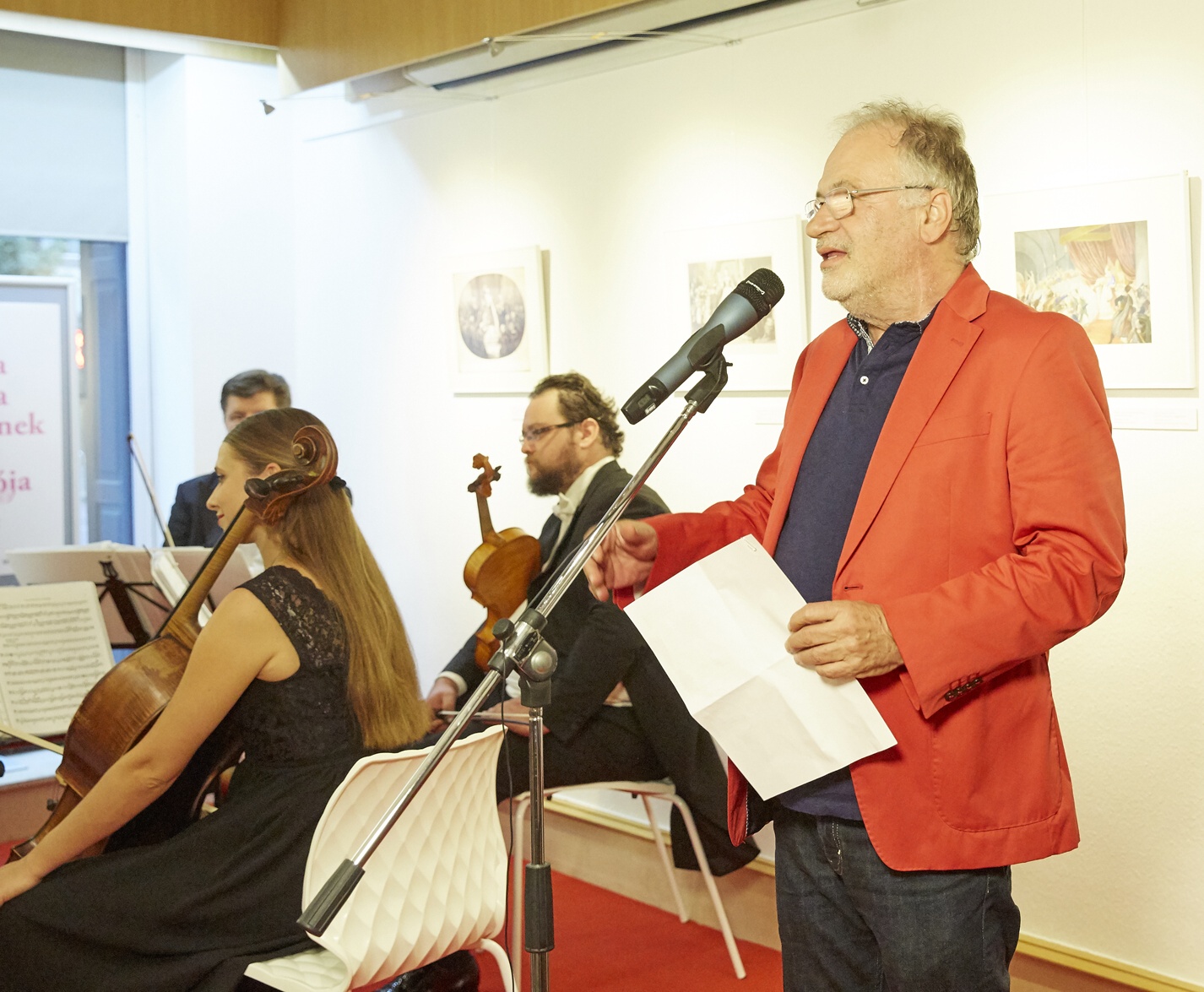 I also spoke about the ceremonial exhibition opening with the Curator Ms. Patrícia Ballx.

Ms. Ballx, how would you evaluate the ceremonial opening of the exhibition “300th Anniversary of Maria Theresa”? What was the atmosphere during the event  like?

Opening an exhibition is always a kind of mix of tension and relief the curator feels when presenting and introducing own work to public. The premises of the Slovak Institute were quickly filled with various important guests and it is always pleasant for the curator to see people discussing, speaking and showing interest in the works, but also to see own work. The expertise and commitment with which the Slovak Institute treated the event preparation provided for a very pleasant evening. 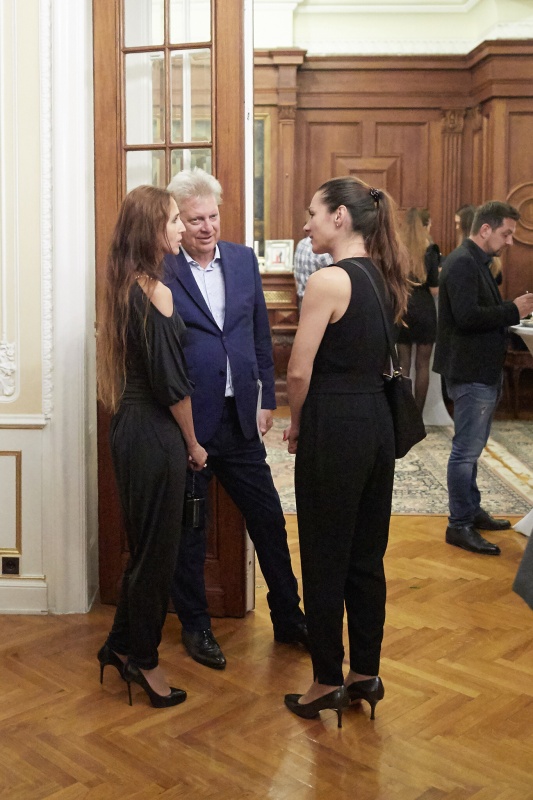 How did you come to the decision to choose just such an important personality as Maria Theresa?

The 300th anniversary of the birth of Maria Theresa is celebrated throughout the whole year. Conferences, exhibitions and books try to remind us that already in the 18th century a woman and a mother was able to have a major position in the Hungarian monarchy. Already during her life she became the most important personality of the Habsburg family, the founder of the Habsburg-Lorraine family, mother of two future emperors, she succeeded to keep unified empire and became a myth for the whole Europe – all of that in spite of unfavourable situation and many enemies. She implemented many reforms still “in force” such as obligatory school attendance, simple numbering of houses and many others. I am very proud that the work of the Gallery of the City of Bratislava under the auspices of the Slovak Embassy in Budapest could be presented in the Slovak Institute in Budapest at the time of celebrating the birth of Maria Theresa and we could listen to the speech of one of her descendant, Archduke Georg von Habsburg. 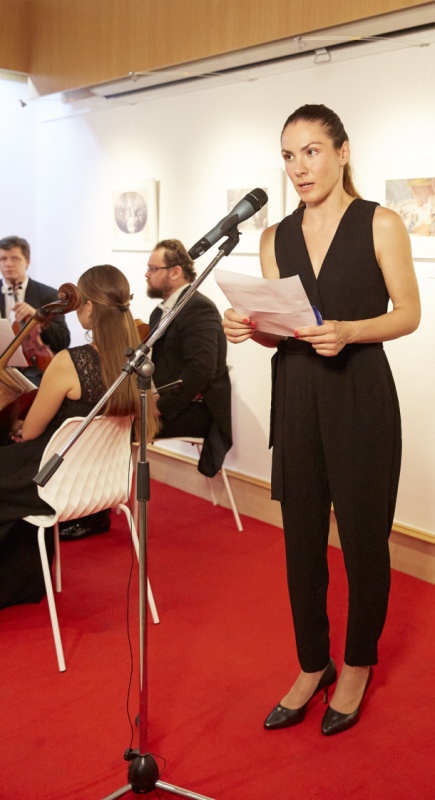 In the end I also interviewed the new Director of the Slovak Institute in Budapest, Ms. Idikó Síposová, who managed her duty perfectly.

Ildikó, could I ask you how you came to the decision to prepare an exhibition “300th Anniversary of Maria Theresa”? What things did you have to manage organisationally?

It was just the major round anniversary of the birth of Maria Theresa, one of the most important rulers of the European history that inspired us with the management of the Gallery of the City of Bratislava to bring this exhibition to Budapest with the aim to enable the Hungarian audience to see the artwork documenting her life and activities.

The organisation of any exhibition requires lots of efforts – from the preparation of premises, negotiations with partners, curators, installation up to preparation of the programme and subsequent social event. Because of that I am pleased that so many guests came to see the exhibition and they evaluated it highly positively. 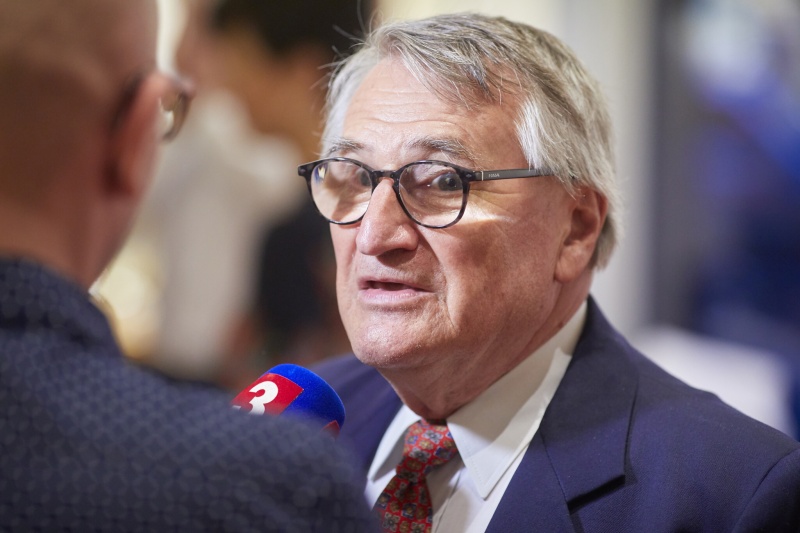 The exhibition itself was preceded by the ceremonial opening held in the Slovak Institute in Budapest. Are you happy with the result?

It was great that both professional and lay public, compatriots, members of the diplomatic mission and partners with whom I will closely cooperate at the preparation and implementation of other events took part at the ceremonial opening of the exhibition. I also appreciate that the invitation was accepted by the Director of the Habsburg Institute in Budapest Prof. Gerö András and the representative of the Habsburg family Georg von Habsburg who also presented their speeches at the ceremonial opening. 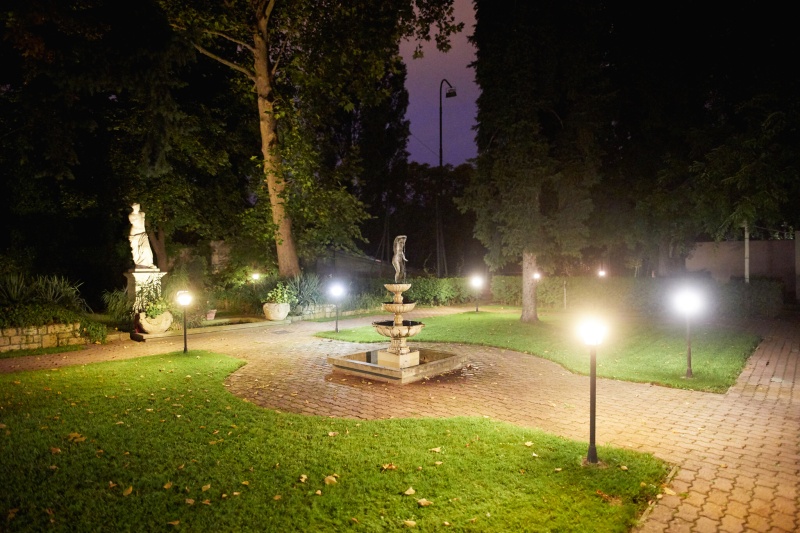